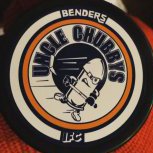 I've seen multiple games already be curfewed in part due to the extra stoppages.

Quad, I see that we basically agree..... I do get wound up over the folks here constantly putting down a major part of the backbone of youth hockey - "Dad\Parent Coaches".  Pre ADM a lot of them simpl